This is the fourth part of a four-part series about the Lightning Network. See parts I, II, and III.

In the last post of this series, we showed how Alice and Bob can pay each other using a two-way, or bi-directional payment channel. We showed that payment channels can be kept open indefinitely, using a revokable transaction scheme.

What we really need is a way for parties to pay one another without having to open a new payment channel, which is what we’ll explore today.

For Alice to pay Carol, she’ll have to either 1. Open a payment channel with Carol (requires an on-chain transaction), or 2. Find a way to get Bob to pay Carol. Alice could simply pay Bob 1 coin and include a message asking him to please pay Carol 1 coin as well. This is called payment forwarding. But this version of payment forwarding requires that Alice trust Bob to send Carol the money. If Alice sends Bob the coin, and Bob doesn’t send Carol a coin in return, Alice loses 1 coin and has no recourse. So we have to find a better way.

What we really need is a way for Alice to pay Bob 1 coin only if Bob pays Carol, which we’ll call Conditional Payment Forwarding. This is a key innovation in the Lightning Network that we’ll be discussing today. 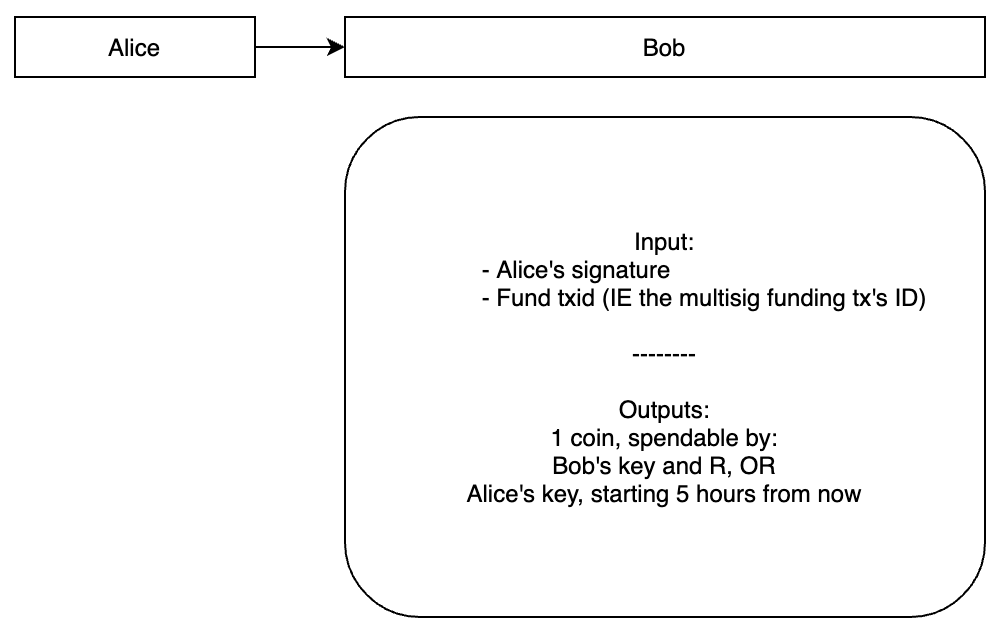 At this point, Alice has sent Bob a transaction that he cannot redeem, because Bob does not know R. But if Alice tells Bob that Carol knows R, Bob can attempt to learn R from Carol. 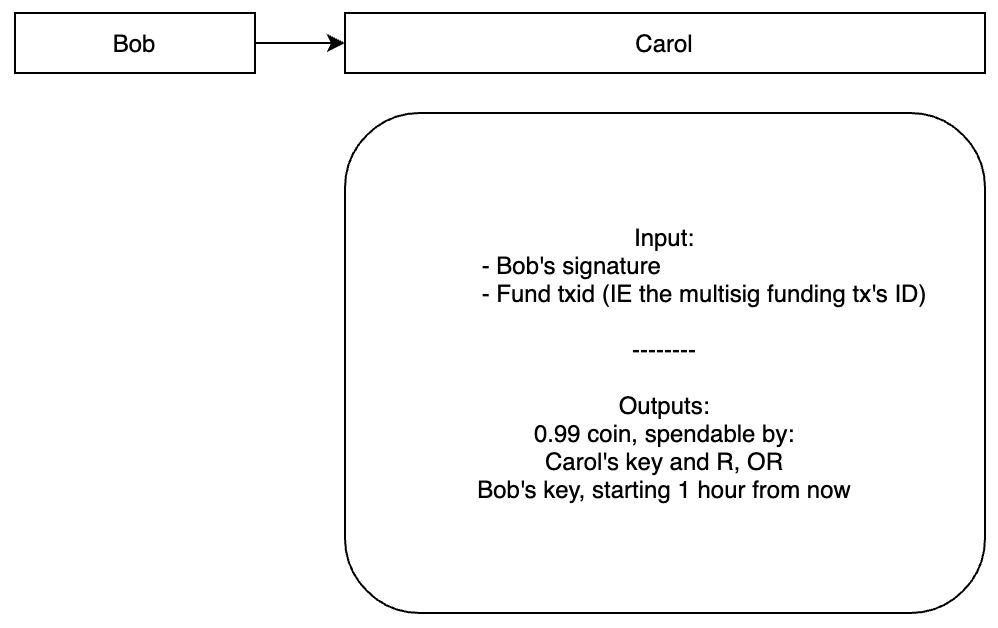 Bob sends Carol a conditional payment, where Carol must reveal R within the next hour to claim 0.99 coins. Notice a few things about this transaction:

Let’s explore each of these points in greater depth.

This is pretty straightforward, but Carol knows R because she created R at the beginning of this transaction process. She can immediately claim the 0.99 coins by including theR value of mysecret with the transaction when she broadcasts it to the blockchain. Bob still does not know R, but when Carol broadcasts this transaction, Bob will be able to see R because Carol has to reveal it to the world to claim her 0.99 coins. So Bob guarantees that Carol will have to reveal R to him in order to claim her money.

Bob has decided that he wants a transaction fee of 0.01 coin to forward this payment to Carol. You might be wondering if Bob could choose a ridiculously high transaction fee, like 0.5 coins for example. Well, he can! But if he does that, Carol is under no obligation to reveal R to him. She can decide whether or not she’s okay with this transaction fee. If she isn’t, she can simply send Alice a message and let her know that the transaction fee is too high, and create a new secret that Alice can use to forward the payment through some other party. So Bob has an incentive to pick a transaction fee that is acceptable to Alice and Carol, because he may lose out on getting a fee altogether if he picks an amount that’s too high. Additionally, they could close their channels with him if they feel that he won’t forward payments for a reasonable fee in the future. So yes, Bob can choose his transaction fee, but he has an incentive to choose a reasonable one.

Well, Alice needs a timelock so that Bob can’t just hang on to the transaction forever. If 5 hours pass and Bob hasn’t broadcasted this transaction, Alice can go ahead and claim back her coin, because Bob obviously failed to forward the payment to Carol.

Using the system described above, Alice can pay Carol without opening a payment channel on the blockchain. This is the system that the Lightning Network uses, and it has tremendous potential to make off-chain payments cheap and easy in Bitcoin. In the example above, we only have one “hop” between Alice and Carol (Bob is that hop), but we could easily have 3, 4, or 5 hops between Alice and Carol using the same logic. These types of transactions are called Hashed Time Locked Contracts (HTLCs), because they use hashed secrets and timelocks to create a payment contract between parties.

Suppose that when Carol receives the HTLC giving her 0.99 coins from Bob, she sends Bob the value of R:

At this point, Bob knows that Carol knows R, because she’s revealed it to him. So two important things are true for Bob:

At this point, if Bob would like to keep his payment channel open with Carol, the two parties can simply revoke the HTLC transaction using the same revocation scheme we described in part III of this series, and Bob can send Alice 0.99 coins in a new simple transaction where there’s no timelock and no need for R. For simplicity, I didn’t include the revocation logic, but it’s exactly the same as in the previous post.

At this point, you have a good start toward understanding how the Lightning Network can allow Bitcoin users to send each other money without using the Blockchain. As of the time of this post, Lightning is still in the experimental phase. There are issues, both known and unknown, that need to be resolved before the network is safe for regular use. A lot of innovation is coming on the horizon for Lightning (and Bitcoin in general) and now is an incredibly fun time to learn about the technology. s If you’re interested in learning more about the technical side of Bitcoin and Lightning, MIT’s Cryptocurrency Engineering and Design course is a good starting point. The last draft of the Lightning Whitepaper is a bit dated but well worth a read to understand the origins of the network. For a bit more of a technical deep-dive, check out the Lightning Network’s specification.